Hello everyone.  No big news.  I haven't found another venue for the guest artists series.  Despite missing that great gig and all of the associated personalities, I just haven't been motivated to initiate the legwork and the cold-calling.  And much to my surprise, no wealthy, jazz-enthused club owner has beat my door down and begged me to begin anew.  Go figure...

But there are a couple of things you may want to know about, the most important of which is that Bruce Eaton celebrates the 15th anniversary of his Art of Jazz Series with the Fred Hersch Trio this Saturday.  Here are the details...

The 2013–2014 Hunt Real Estate Art of Jazz Series will present acclaimed jazz pianist Fred Hersch and his trio at the Albright-Knox Art Gallery on Saturday, November 2, 2013, at 8 p.m.  A pre-concert conversation, “The Alchemy of Scott LaFaro,” with Art of Jazz Series Producer Bruce Eaton, will take place at 7 p.m.  Tickets are $25 for Gallery Members and $29 for non-members and can be purchased at the Albright-Knox Art Gallery Admissions Desk, by calling the Gallery at 716.270.8292, or online at www.albrightknox.org/artofjazz.

Acclaimed as “one of the small handful of brilliant musicians of his generation” (DownBeat), “the most arrestingly innovative pianist in jazz” (Vanity Fair), and “singular among the trailblazers of [his] art” (The New York Times), jazz pianist and composer Fred Hersch has performed on more than one hundred recordings and collaborated with an astonishing range of artists in the worlds of jazz (Joe Henderson, Toots Thielemans, Stan Getz, Kurt Elling, Bill Frisell), classical (Renée Fleming, Dawn Upshaw), and Broadway (Audra McDonald).  Widely hailed for his ability to steadfastly create a unique body of original works while reinventing the standard jazz repertoire, Hersch has had numerous accomplishments, including a Guggenheim Memorial Fellowship for composition and five Grammy nominations.  As a solo pianist he was the first artist in the seventy-five-year history of New York’s legendary Village Vanguard to play weeklong solo engagements.  Hersch was the 2012 winner of the prestigious Grand Prix du Disque in France for his Alive at the Vanguard trio recording, which features the same musicians who will be joining him for his Albright-Knox concert: bassist John Hébert and drummer Eric McPherson.

Born in Cincinnati, Ohio, in 1955, Hersch was the first openly gay, HIV-positive jazz musician of his generation. Since 1993 he has been a passionate spokesman and fundraiser for AIDS services and education. His 2010 multimedia theatrical project My Coma Dreams was based on dreams he retained after emerging from a two-month coma in the summer of 2008. The project was the subject of a much-noted extended feature in The New York Times Magazine (www.nytimes.com/2010/01/31/magazine/31Hersch-t.html).

Now in its fifteenth season as the most successful music series of its kind in Western New York history, Art of Jazz has established the Albright-Knox Auditorium as one of the premier venues for live jazz in North America. The 2013–2014 series will continue with Tim Berne/Snakeoil (January 26, 2014, 3 p.m.), Ambrose Akinmusire (March 23, 2014, 3 p.m.), and Cécile McLorin Salvant (April 26, 2014, 8 p.m.)

And...
Friday, 11/1 at Bacchus     8:00 - 11:00
The Warren Stirtzinger Trio
Warren Stirtzinger, guitar     Wayne Moose, bass     your correspondent, drum set
This should be fun.  Bacchus is the former Calumet, 56 Chippewa, corner of Pearl.  Warren will lead the trio through his many stringed inventions, replete with his usual taste and artistry.

Hope to see you...
dan
Posted by Howard Goldman at Wednesday, October 30, 2013 No comments:

[10/23/2013 Update: Hello, everyone,
Well, life (and a scheduling snafu) has intervened and I find myself having to reschedule the Buffalo Brass rehearsal for this week. We will not be at Milkie's Wednesday evening, but I will reschedule the group at Milkie's within the next few weeks. I'll keep everyone posted. So sorry for the late change, we look forward to seeing you soon! ... Phil Sims]

I hope you all had a great weekend. It was a wonderful mixed bag for Cindy and I. We had a great time Friday night at the Roycroft with the quartet. Saturday was off to Rome (wait for it... New York) for my grandson's 3rd birthday, andSunday, although we were dark at Milkie's, the quartet came together to start work on new material and some exciting projects. I hope to have some real interesting developments to report in the coming months.

Not for nothin', but kids's cartoons are just not what they used to be (grouchy old guy alert). I think they're missing out. I mean, what happened to classics like "Duck Season, Wabbit Season", Popeye quipping out of the corner of his mouth "I don't like your altitude", while boxing with Bluto on the wing of a plane, Bugs and Elmer doing Wagner opera, and Bullwinkle explaining to us (in Bullwinkle's Corner) how to stop a bully on the beach by opening with, "First, find a bully".

Dora, Yo Gabba Gabba, Oomi Goomi, or whatever? Yikes! However, it's probably for the best, you know, gentler times. I still remember the day our mom banned us from watching the Three Stooges because my brother poked me in the eye with a stick! There's definitely a pound of dirt missing somewhere from my early days!

So we forge on to the present. Here's what's happening this week in my little jazz world. We'd love to see you.

Just off our September bash, we get back to work on some new material, and yes, we'll go over some of the old tried and true. 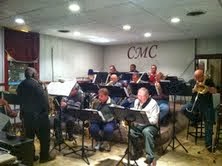 You'll notice an empty trumpet chair, stage left (your right) in the back row. Well, I guess someone has to get the drinks! Come enjoy one, yourself, while Carol puts us through our paces.

And folks, that's it for this week. Nothing on the weekend at all. However, Saturday night, Cindy and I have tickets to see Doc Severinson and his band at Kleinhans. No music this Sunday at Milkie's. we will be back soon, with our next guest artist. Stay tuned, and have a great week.
Posted by Howard Goldman at Monday, October 21, 2013 No comments: