Hello friends.  Check out this line-up...


Clay Jenkins, trumpet     Bobby Jones, piano     Jeff Campbell, bass     your host, drum set
We are honored to present one of the most highly regarded trumpet players in these United States.  Were it not for his teaching responsibilities at the esteemed Eastman School, Clay Jenkins would still be logging the frequent flyer miles, but living either in LA or New York.  And the same goes for Jeff Campbell.  In fact Jeff has been known to sub on the Village Vanguard Monday night band when his schedule permits.  Throw in Bobby Jones, and we're in some heavy company.  Parking is free and easy across the street from the club in the bank parking lot.  Milkie's on Elmwood is at the intersection of West Utica & Elmwood Avenue.  882-5881


Buffalo Choral Arts
Marcia Giambrone spared no expense for her Spring Concert this year:  "Live at the Riv" features the Buffalo Choral Arts Singers accompanied by a 10 piece band in a musical journey of stories told through song: music from the Great White Way and the Silver Screen, excerpts from Les Miserables and Phantom of the Opera and a very special tribute to the late Marvin Hamlisch.  Tickets are $15 and may be purchased on line at www.buffalochoralarts.org or by contacting the box office at 775-SONG (7664).

Gretchen Parlato, vocals     Jason Linder, piano     Alan Hampton, bass     Mark Guiliana, drum set
The 2012–2013 Hunt Real Estate Art of Jazz Series will present acclaimed jazz vocalist Gretchen Parlato in her first area appearance at the Albright-Knox Art Gallery on Saturday, May 4 at 8 p.m.  A pre-concert Conversation, “Los Angeles Jazz: The Hot and Cool,” with Art of Jazz Series Producer Bruce Eaton will take place at 7 p.m.. Tickets are $25 for Gallery Members and $29 for non-members and can be purchased at the Albright-Knox Art Gallery Admissions Desk, by phone  or online at http://www.albrightknox.org/artofjazz.

Gretchen Parlato, a native of Los Angeles and the winner of the 2004 Thelonious Monk International Jazz Vocals Competition, has been lauded as “the most original jazz singer in a generation” (The Boston Globe).  Parlato’s 2011 release The Lost and Found (ObliqSound), produced by Robert Glasper and featuring her radio hit version of Simply Red’s Holding Back The Years, was the top-selling jazz vocal album of the year and a fixture on year-end best-of lists.  She was recently awarded Best Female Jazz Vocalist of 2012 by the Jazz Journalists Association and was voted #2 Female Jazz Vocalist for the year (ahead of such notables as Esperanza Spalding and Diana Krall) in the Downbeat International Jazz Critics Poll.

Jazz legend Wayne Shorter has said, “Gretchen Parlato knows how to play the same instrument that Frank Sinatra played.  There’s no one out there like Gretchen.”  With a unique sound that draws on the jazz tradition, Brazilian music, and organic R&B, and “holds something of the vulnerable intimacy of Billie Holiday and Miles Davis” (All About Jazz), Gretchen Parlato has “an almost magical connection to the music” (Herbie Hancock).  She will be performing with a stellar trio including noted pianist Jason Linder, bassist Alan Hampton, and drummer Mark Guiliana, whose recent duo performances with Brad Mehldau had Time Out London concluding that he is “possibly the best drummer in the world.”

Now in its fourteenth season as the most successful music series of its kind in Western New York history, Art of Jazz has established the Albright-Knox Auditorium as one of the premier venues for live jazz in North America.  For the most current information, please call the Gallery at 716.882.8700 or 716.270.8292, or visit www.albrightknox.org/artofjazz.

The Hunt Real Estate Art of Jazz Series is supported in part by a generous grant from Hunt Real Estate. It is produced by Bruce Eaton and organized by the Albright-Knox Art Gallery.  The Gretchen Parlato concert has also been made possible through the generous support of The Weissman Family Foundation.

AK Café will serve dinner prior to the concert.  For reservations, which are highly recommended, please call 716.270.8223.

Perspective...
If we long to believe that the stars rise and set for us, that we are the reason there is a Universe, does science do us a disservice in deflating our conceits?
- Carl Sagan

I bet everyone is busy, busy! I did some yard work this week. That was seasonally uplifting, to say the least. I hope you are enjoying the start of spring. Also hope you join us for some great music this week. Hope to see you soon!

Wednesday April 24 Buffalo Brass Big Band open rehearsal at Milkie's on Elmwood (at Utica) 7:15 to 9:15
This great 19 piece big band goes through its paces. No cover.

Lisa Hasselback has been a pianist in the Buffalo area for 25 years playing solo, in small groups and big bands. She has played with local/international jazz icons such as Bobby Militello, Dave Schiavone, Bruce Johnstone, Clay Jenkins, Cindy Miller and Wendell Rivera. She has also played for notable entertainers including The Four Lads, The Four Aces, The Chordettes, The Drifters and Bob Newhart.
Trombonist John Hasselback, Jr. began his musical career at an early age, performing with his father as a young teenager.  He is a student of legendary Blue Note recording artist Jackie McLean.  John has been very active on the jazz scene in Western New York for the past 25 years, playing with groups including the Gap Mangione Big Band, Phil DiRe's "Buffalo Bop," The Buffalo Jazz Workshop, John Bacon, Jr.'s Multi-Jazz Dimensions, Wendell Rivera's Latin Jazz All Stars, Phil Sims & The Buffalo Brass, and many others.  Beyond Western New York, John has performed across the United States and Europe with many noted Jazz artists including Jaki Byard, Don Menza, Steve Davis, Maynard Ferguson, Roswell Rudd, and Chuck Mangione.  He is a featured soloist on recordings with Gap Mangione, Kenny Wheeler, and Don Menza.   "Menza Lines," which was recorded live in Los Angeles at the "Stratospheric" celebration of Maynard Ferguson's 75th birthday, was selected as one of the top releases of 2005 by the critics of Jazz Times Magazine.
Posted by Howard Goldman at Wednesday, April 24, 2013 No comments:

Hello friends.  Another 11th hour invitation...  Both playing opportunities this week are in the company of one Bobby Jones.  It doesn't get better than that...

Colleen Williams, vocals     Bobby Jones, piano     Jerry Livingston, bass     your host, drum set
Coll the Doll!  Bandstand charm, laser-like pitch, cool tunes, and arrangements by Jones...  What's not to love?  This will be a blast.  Still experimenting, we're moving the start time to 7:00, hoping to draw a dinner crowd but still be playing for a later arriving audience.  Milkie's on Elmwood is at the intersection of West Utica & Elmwood Avenue.  882-5881

Bobby Jones, piano     Jim Colemon, bass     yours truly, drum set
It's no secret anymore.  Dick & Jenny's Bake & Brew is an absolute treasure of a food emporium.  And I'm speaking from experience.  Actually, multiple experiences.  OK, full disclosure:  I'm there once or twice a week.  Only this Wednesday, the customer gives way and the musician holds sway.  A second consecutive night with Bobby Jones, only in a more intimate trio setting...  Dick & Jenny's is at the intersection of Baseline & Love Rd on Grand Island.  775-5047

And the problem with background checks is?
I do dislike it when people try to put me in a box by saying I’m “anti-gun.”  Someone pulled that on me in a debate after Newtown, and I’ll repeat now what I said then: I’m not anti-gun, I’m pro-kindergartner.
- Richard RJ Eskow

Wednesday Jazz @ The Pan Am

Hello friends.  We’re back, the goal being to keep the gig alive…  Nobody booked for next week yet, but we’ll continue to make every effort and see what the fates favor...

Another new voice!  Trumpeter Mark Filsinger makes his debut on our Tuesday jazz experiment.  New to our gig maybe, but not new to the scene, Mark is on the faculty at Buffalo State College and is also a featured soloist with the Buffalo Brass Big Band.  Stop in, have a bite, have a sip, have a listen, and help us make Milkie’s the new venue for swinging, creative music in our home town.  Milkie's on Elmwood is at the intersection of West Utica & Elmwood Avenue.  882-5881

At least it's a lovely day...
The difference between death and taxes is death doesn’t get worse every time Congress meets.
–Will Rogers 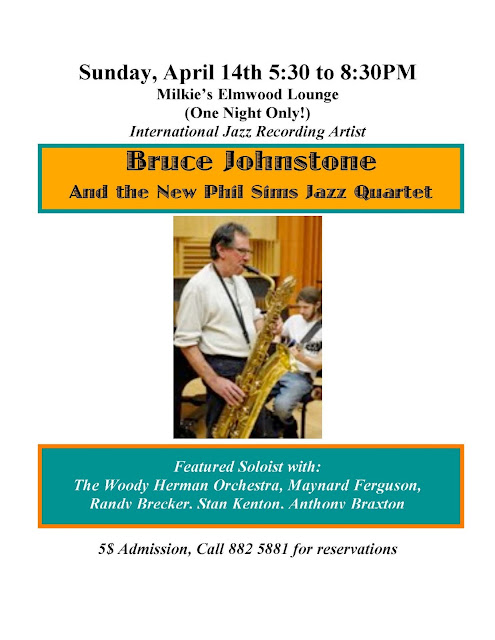 I hope everyone enjoyed what proved to be our first real 72-hour, spring-like weekend. Motorcycles on the road, saw a couple convertible tops down, flip flops...oh, and that was in February! You gotta love Buffalo. we are professional-grade season pushers!

There is a plethora of great jazz on tap for April and very late April, also known as the first week of May. Highlights include Internationally known saxophonist, Bruce Johnstone on 4/14 (flyer attached), and a great quintet near the end of the month featuring Buffalo's leading "Mr. and Mrs. jazz", trombonist, John Hassleback and pianist, Lisa Hassleback on 4/28.
I'll say my thanks and farewells now, and let you take in this amazing lineup of jazz in April. We all enjoy seeing you whenever you can make it out, and thanks. Cindy and I and all the bands hope to see you very soon!