An Evening With Jackie Jocko And Joe Peters 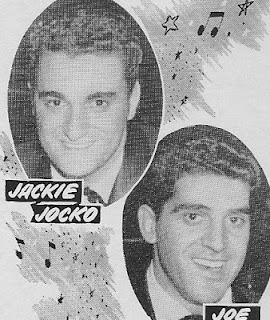 AN EVENING WITH JACKIE JOCKO AND JOE PETERS
A short time ago you received an invitation to join us in honoring two Buffalo treasures: Jackie Jocko and Joe Peters!  There has been a change in location:  We will now be gathering at the Hyatt Regency Buffalo, Two Fountain Plaza, 14201, on Sunday, October 28, 2012, at 5:30 pm to fete this remarkable duo.

This unique event will be small, intimate and, it is hoped, a surprise for our guests of honor.  An open seat will be placed at each table so that everyone can enjoy a direct dose of Jackie's and Joe's affection throughout the evening. With the help of fellow event organizer Judge Sal Martoche, arrangements have been made for a handful of public officials, along with local musicians, artists, media types, and entertainment aficionados, to join in the festivities.

If you already replied to be part of this celebration, you are on the list!  If you already sent in your check, enclosed are your tickets.  Seating is purposely limited to ensure intimacy, and the cost of the evening has been cut to the bone.  An open bar at 5:45 pm will be followed by dinner at 7:00 pm.  Dinner will include an entrée of Filet Mignon.  Please let us know three days in advance if you prefer vegetarian.  The cost will be $100.00 per person, which will enable us to remember Jackie and Joe in a meaningful way. Dress is casual.  And, valet parking service is available.

Please contact Amy Bigaj at 855-1050 to reserve your place at this can't miss event.  We look forward to seeing you on October 28th.

Hello everyone.  Another special night...

Tuesday, 10/16 at the Iris Restaurant     7:30 - 10:30
Miles Tucker, tenor saxophone     Wayne Tucker, trumpet     George Caldwell, piano     Sabu Adeyola, bass     your host, drum set
Last week Craig Kastelnik & Patty Flaherty made the trip from Bethlehem, PA to give an inspiring performance at our weekly jazz experiment.  This Tuesday, the talent arrives via Syracuse, Brooklyn, & Clarksdale, Mississippi.  Only Sabu & I are Buffalo born.  OK, George Caldwell lives among us now, when he’s not on the road anyway.  But the Brothers Tucker have to arrange this hook-up, what with Wayne traveling from New York & Miles from Syracuse.  And still, no cover charge.  This will be an evening of contemporary music, steeped in the influences of these four remarkable musicians.  Standards will give way to a more modern concept, but a concept not bereft of melody and feel.  Miles & Wayne are twenty-somethings.  The material they bring in is influenced by the music that is inspiring them now.  And that is singular and refreshing place.  We hope you can join us.  Vinnie Lesh at the Iris has embraced our idea of contemporary music of the jazz and creative variety, even offering the club to the Buffalo Brass for our biweekly rehearsals.  When you’re with us, the art form thrives.  Thank you.  The Iris Restaurant - in the plaza at the intersection of Maple & Sweet Home Roads in Amherst.  831-3271.  Good music, good food, good people, world-class artists, chilled spirits, and a great hang.

Wednesday, 10/17 at the Iris Restaurant     7:30 - 9:30
Buffalo Brass open rehearsal
We played a 100 year anniversary celebration for the Park School on 10/6 - mostly standards and straight ahead.  With that prep behind us, it's time to stretch out.  Feel free to enjoy the workout from the comfort of your table as Phil tests his musicians with some of his rather challenging arrangements.

Perspective...
Who are we?  We find that we live on an insignificant planet of a humdrum star lost in a galaxy tucked away in some forgotten corner of a universe in which there are far more galaxies than people.
- Carl Sagan

Hello everyone.  A special night indeed... 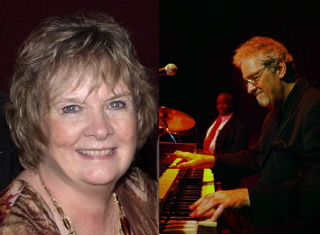 Craig Kastelnik, Hammond B3     Patty Flaherty, vocals     Chuck Buffamonte, guitar     your host, drum set
Last week in Bobby Jones, we featured one of the greatest B3 artists in the world.  This week, in Craig Kastelnik, the same compliment applies.  Hype?  Nope.  Truth.  If you remember the days at our curiously lit location when Patty & Craig drove north for their two appearances every year, you know I'm not blowing smoke.  This much we do know: There are elite musicians the world over, most of whom we don't know anything about.  There are great musicians who never achieve fame, as there are mediocre musicians who do.  Some elite musicians choose not to tour, others don't choose to test the rigors of New York City.  I mentioned last week that Bobby Jones turned down the gig with Tower of Power.  Tower of Power!  He wanted to stay here.  Craig is another such musician.  He flirted with the big stage as keyboardist for Eddie Money in his younger days.  More recently he has taken some short tours with Nina Simone's daughter (simply "Simone"), and he and Patty have also been featured with the legendary Bernard Purdie.  But though the equal of say, Joey D, neither Bobby nor Craig enjoy that kind of fame.  However, I defy the casual listener to take a blindfold test and hear the difference that said fame implies.  We invite you to join us as we celebrate a homecoming and feature another of the world's elite B3 artists.  The Iris Restaurant - in the plaza at the intersection of Maple & Sweet Home Roads in Amherst.  831-3271.  Good music, good food, good people, world-class artists, chilled spirits, and a great hang.

And here we are...
I should not proceed by land to the East, as is customary, but by a Westerly route, in which direction we have hitherto no certain evidence that any one has gone.
- Christopher Columbus,  August 3, 1492

Hello everyone.  B3 Heaven at the Iris for the next two Tuesdays...

Tuesday, 10/2 at the Iris Restaurant     7:30 - 10:30
Darcy Hepner, tenor saxophone     Bobby Jones, Hammond B3     your host, drum set
And we can thank Darcy Hepner for getting us started.  Oh, yeah.  Who?  Best to go to www.darcyhepner.com/bio.htm for a rather impressive update, but here's a synopsis: Darcy's father, Dr. Lee Hepner, was the founder of the Edmonton Symphony Orchestra and a Professor of Music at McMaster University in Hamilton, Ontario.  Darcy first came to music as a cellist, whereupon he won a scholarship to the famed Congress of Strings in Cincinnati.  Shortly after, he discovered the Beatles and the electric guitar.  "That was my recreational thing," he recalls.  "I was playing guitar and had a little band that did Blood, Sweat & Tears stuff.  But the saxophonist couldn’t play anything that I wrote, so out of frustration I just said, 'Gimme that, it can’t be that hard.'  And here we are, live at the Iris, in the company of one of the greatest B3 players in the world.  This organ trio thing was Darcy's idea.  I hope his studies with Pat La Barbera, Sonny Stitt, Lee Konitz and Bob Mintzer prepared him for his night of feature with Bobby Jones.  Or maybe his teaching experience at Berklee.  His five years with Blood, Sweat & Tears?  Or his experience on the stand with Tony Bennett, B.B. King, Aretha Franklin, Sergio Mendes, Henry Mancini, Mel Tormé, the Artie Shaw Orchestra, David Liebman, Kenny Wheeler, or Louie Bellson...  Jones is formidable.  But with credentials like the aforementioned, Darcy will be ready.  How about you?  Bobby Jones at the B3 should command a full house by himself.  With the addition of a world-class tenor player whose schedule rarely allows a trip to Buffalo, you might want to get there early.  The Iris Restaurant - in the plaza at the intersection of Maple & Sweet Home Roads in Amherst.  831-3271.  Good music, good food, good people, world-class artists, chilled spirits, and a great hang.

Wednesday, 10/3 at the Iris Restaurant     7:30 - 9:30
Buffalo Brass open rehearsal
Phil is preparing the band for a hit this Saturday, music mostly of the straight ahead and swinging variety.  You're invited to watch and listen as Phil tunes us up.  Pretty interesting from an observer's standpoint...

Phil DiRe Buffalo Bop
Phil Di Re, tenor saxophone     Bobby Militello, alto sax & flute     Richie Merlo, trumpet & flugelhorn     John Hasselback, trombone     Matt Michaud, guitar      Wayne Moose,  bass     Lisa Hasselback, piano     Louie Marino, drum set
I'll meet you there?  My gig with the Buffalo Brass this Saturday goes till 8:00.  Tear down, load up, and head straight to the Iris for Phil DiRe's latest concept, "The Power of Eight".  I can't wait to hear Louie Marino hold this band together and navigate it through the myriad of textures, solos, rhythms, meters, and concepts.  Louie is the patriarch of drummers in Buffalo.  No drummer brings more experience, more swing, or more creative soloing to the music.  Sticks, brushes, mallets, any meter, any tempo, any bag...  And when you hear Louie solo, you hear music - not a bunch of drums regaled by blunt force.  You hear music.  In the hands of a master like Louie, the melody and the form are all there for the ear, rendered by the primal instrument of the human spirit.  The rest of the band isn't bad either - not a bad idea by Phil to invite a beloved and rather well known alto player to round out the sax section.  And to complete the horn section Phil has recruited John Hasselback, who himself is not only seasoned soloist, but a walking jazz encyclopedia, and Richie Merlo, whose round sound blends ideally with John's.  "The Power of Eight" adds two chord contributors whose harmonic concepts provide a lush foundation for each soloist's improvisational adventure.  Matt Michaud's musicality has caught the attention of both Phil and Bobby Militello.  And Lisa?  Lisa just hears it all.  She is simply the kind of pianist that can be called upon for any musical responsibility.  She'll massage a singer through any standard, in any key.  She'll read, she'll solo, and she'll swing.  And who did Phil trust to anchor this band, with its rather intimidating roster of musical heavyweights?  Wayne Moose is a guy who not only lays it down, but is a bassist with a rare gift: Wayne's solos are at once rhythmically inventive and melodic - not an easy endeavor on an unwieldy instrument that is bigger than most defensive linemen.  Thus "The Power of Eight".  At eight.  This Saturday at the Iris.

How rich?
People say (Romney's) too rich and out of touch.  I've tried to point out that he has many homes without elevators.
- Conservative columnist David Brooks